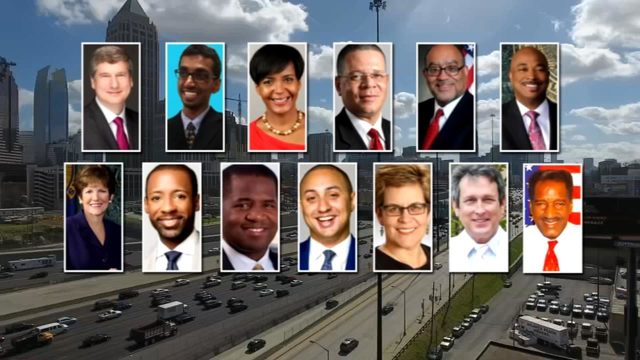 ATLANTA – There has been a big shake-up in the race for Atlanta’s next mayor.

Until now, Mary Norwood held a commanding lead. While she still remains the front-runner, our new poll shows Keisha Lance Bottoms has made a major surge and Peter Aman is the only other candidate with more than 10 percent of the vote.

Just a few weeks ago, Lance Bottoms and Aman were basically tied.

But in a short amount of time she surged ahead, while one other candidate took a significant drop.

We asked 750 likely voters, “If the election for mayor were held today, for whom would you vote?”

After crunching the numbers with our pollster, Mark Rountree, he said Lance Bottoms is climbing.

“She has gone from 12 percent to virtually 19 percent and is now challenging, and she’s about to take the lead from Mary in this race,” Roundtree told Channel 2’s Dave Huddleston.

Norwood has been the front-runner since March. She still leads with 22 percent of the vote, followed by Lance Bottoms with 19 percent.

“At the end of the day, it’s about the election on Nov. 7. I hope that these results bear out on Election Day,” Lance Bottoms said.

[READ: Who is running for mayor?]

Rounding out the top three candidates is Aman with 12.6 percent. Rountree said Lance Bottoms is within striking distance of Norwood.

Another person doing well is Cathy Woolard. She leads the second tier with 6.3 percent.

The other major development in this poll was the catastrophic drop by City Council president Ceasar Mitchell going from 10.4 to 5.8 percent.

Mitchell told Huddleston that despite the drop, he’s pushing ahead.

“I think we have to continue to push forward and encourage the public to do their own poll which is to vote,” Mitchell said.

If no candidate receives a majority of the vote, a runoff will be held Tuesday, Dec. 5.

If the election for Mayor of Atlanta were held today, who would you vote for?