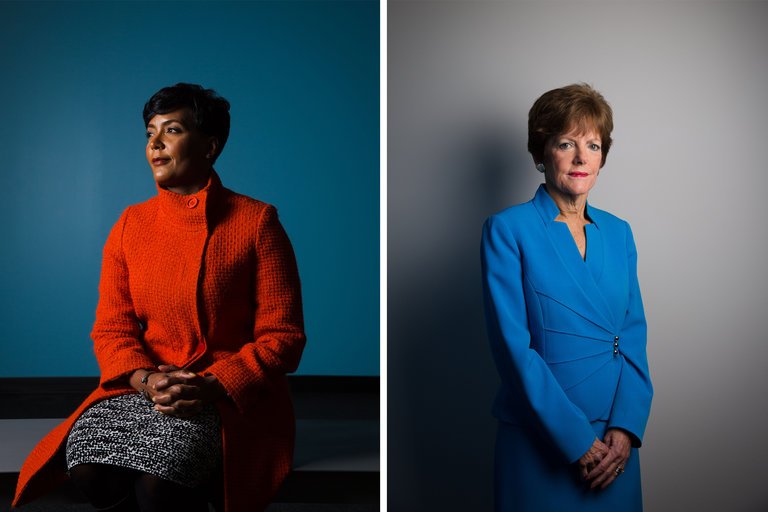 In Atlanta, a Thorny Question: Should the Next Mayor Be Black?

ATLANTA — How important is it that the next mayor be black?

That is the knotty question in Atlanta, the celebrated base of African-American cultural, economic and political power that has only had black mayors since the Ford administration — and also gave the world a man who spoke of judging people on the content of their character, not the color of their skin.

The question, particularly in black circles, has been animating cocktail parties, college homecomings and water-cooler chat, a reaction to a trio of ambitious white candidates who are among the eight major contenders in a wide-open race to replace Mayor Kasim Reed. The election Tuesday will almost certainly see the top two candidates head to a runoff, and it comes as many African-Americans around the country are recalibrating their ideas about race and politics in the midst of the Trump presidency.

“It’s a very hot topic — right now people are feeling responsible for making sure a black mayor is elected again,” said Kelley Bass Jackson, the former daughter-in-law of Maynard Jackson, Atlanta’s first black mayor, who noted, pointedly, that she does not subscribe to this way of thinking. “They want that because that’s what we know.”

Mr. Reed, who is barred by term limits from seeking a third four-year term, has overseen a period of urban renaissance that has also seen Atlanta become wealthier and whiter. Since 2010, the percentage of blacks has diminished from 54 percent of the city population to about 51 percent.

This year, polls show the front-runner to be a white woman, Mary Norwood, an indefatigable former Junior League vice president from the tony neighborhood of Buckhead. Central to Ms. Norwood’s appeal is her promise to fight for all neighborhoods, a message that nearly earned her the mayoralty in 2009, when she lost to Mr. Reed in a runoff by about 700 votes.

Ms. Norwood, an at-large councilwoman, is convinced that black voters will see beyond race. “We have been so forward thinking, so progressive and so inclusive, and that’s the way our people work in this town,” she said. “I have wonderful support all across the city.”

The two other white candidates, Peter Aman and Cathy Woolard, are also making the case to black voters that they can represent the city as well as or better than the major black candidates, a high-powered group that includes the City Council president, two council members, a former state senator and the former head of the Fulton County Commission.

The idea that a victorious white candidate would break a streak of African-Americans dating to 1974 does not sit well with everyone. On Atlanta’s historically black southwest side, anonymous signs have appeared declaring, “Vote the black slate.”

The election is not the only high-profile municipal drama in which voters will be asked to navigate a complex thicket of race and power. In Detroit, a mayoral runoff pits Coleman A. Young II, the son of the city’s legendary first black mayor, against the incumbent, Mike Duggan, Detroit’s first white mayor in 40 years.

In New Orleans, Mayor Mitch Landrieu, who is also leaving office because of term limits, may go down as something of an aberration: a white politician with a civil rights pedigree that sets many blacks at ease. His father, former Mayor Moon Landrieu, integrated city hall in the 1970s. Indeed, the next New Orleans mayor is guaranteed to be African-American, with two black candidates heading to a Nov. 18 runoff: LaToya Cantrell, a city councilwoman, and Desiree M. Charbonnet, a former municipal court judge.

Some experts wonder whether just as Barack Obama’s presidency made it easier for blacks to support white candidates, Mr. Trump’s election could have the opposite effect.

Jamal Simmons, a Washington, D.C., political consultant with experience in Atlanta and Georgia politics, said he used to hear black voters in focus groups say: “Well, if America can elect a black man then why can’t we elect a white candidate, if he is the best person?”

Today, however, Mr. Simmons said he wonders if “race consciousness in politics has gotten more acute for black voters” in a time of controversial police shootings of African-Americans and the election of Mr. Trump. “It feels like we’re returning to some retrenchment era,” he said, “like the one that occurred after Reconstruction.”

The tension was evident at the S&S Cafeteria on Atlanta’s South Side, where Anthony Day wrestled with the question of whether the next mayor needed to be black. Mr. Day, 53, initially declared that a candidate’s race did not matter.

But as the conversation unspooled, Mr. Day, a black Atlanta native and the owner of a small home-improvement company, said his optimism about American race relations had curdled with the election of Mr. Trump, which Mr. Day saw as an expression of white backlash to the Obama presidency.

Mr. Day also spoke of the “Atlanta way,” the decades-old idea, part myth and part fact, that the writer William Jelani Cobb has described as “a kind of racial détente orchestrated by black and white elites that allowed commerce to thrive.” Mr. Day said he doubted that the détente would survive the Trump age with a white mayor at the helm.

“If you get a black mayor, Atlanta will stay together,” he said. “If you get a white mayor, it’s going to crumble.”

Mr. Day said he was supporting Vincent Fort, an African-American state senator who has railed against income inequality and has been endorsed by Senator Bernie Sanders.

Mr. Reed has in many ways embodied the Atlanta way. He teamed up with Georgia’s Republican governor, Nathan Deal, on securing federal approval for the deepening of the port of Savannah, an important issue to business. In the summer of 2016, he lowered the temperature of a series of emotional Black Lives Matter protests by personally meetingand negotiating with the group’s leaders.

Mr. Reed has also seen his administration rocked by an continuing federal investigation into city contracting. (Mr. Reed has not been charged, and none of the evidence made public thus far has implicated him.) He has been criticized for a combative style and allowing the Atlanta Braves to decamp for the suburbs.

But when asked to grade Mr. Reed’s performance, Ms. Norwood, in a July interview, declined. “I’m not running against Kasim Reed,” she said.

Ms. Norwood is understandably concerned about offending Mr. Reed’s black supporters. But her opponents are looking for other ways to pry black and liberal voters away. Though the mayor’s race is nonpartisan and Ms. Norwood describes herself as an independent, the state Democratic Party has launched a campaign labeling her “Mary the Republican.’’ The campaign underscores her links to local conservatives and argues that, by refusing to endorse the Democrat Jon Ossoff in Georgia’s Sixth District House race, she “helped put a Trump ally” — Representative Karen Handel — “in Congress.”

And one of Ms. Norwood’s most formidable opponents, Councilwoman Keisha Lance Bottoms, an African-American, has been running TV adsthat declare Ms. Bottoms to be “The Democrat for Mayor.”

The message could resonate in a largely Democratic city and may also help draw some distinctions in a race where there is little daylight between candidates on the issues.

In their own way, all the candidates are running as the person who can best represent all races and perpetuate the city’s civil rights legacy. Ceasar Mitchell, the City Council president, has unveiled endorsements from Andrew Young and C.T. Vivian, civil rights icons. Councilman Kwanza Hall emphasizes his work in weakening the city’s marijuana sentencing laws. John Eaves, the former Fulton County chairman, promises a city that is “compassionate and prosperous.’’

Ms. Woolard, a former councilwoman, touts her bona fides as “the first openly gay person elected to office” in Georgia. Mr. Aman, a former partner at Bain & Company who did a stint as the city’s chief operating officer, has put his campaign office on Auburn Avenue, a historically black high street, and called for the removal of Confederate symbols.

Mr. Aman has won the vote of Ms. Jackson. But in a city seeking racial harmony, he and the other white candidates may have a tougher time among other voters — and not only black ones. Marc Morial, the president of the National Urban League, said that in New Orleans, where he once served as mayor, “influential whites will say to me privately that it’s in the best interest of the city to have a strong African-American mayor because of that sense of the ability to unite the city.”