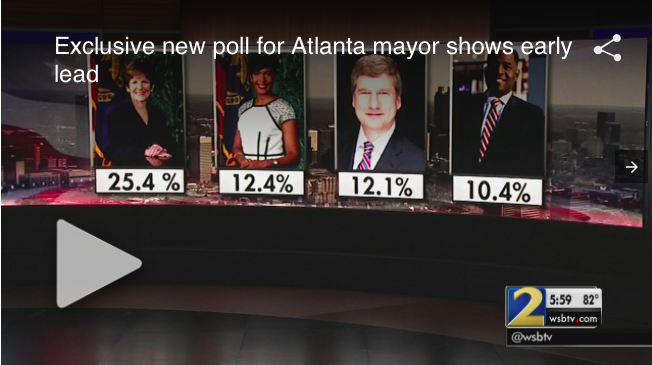 ATLANTA – More than a dozen people are in the race to become Atlanta’s next mayor.

And while an exclusive WSB-TV, Landmark Communications poll shows one candidate with an early lead, there’s a close fight for second and a lot of undecided voters.

Our poll of 500 likely voters in the November election were asked, “If the election for Mayor of Atlanta were held today – for whom would you vote?”

NOTE: There are 13 candidates on the ballot. Our poll named the top eight.

“Mary Norwood is leading overall and is doing pretty well with all of the demographics. But she is not anywhere close to a majority,” said pollster Mark Rountree.

In a similar poll conducted earlier this year by WSB-TV and Landmark Communications, Norwood ran away with 28.6 percent of the vote.

So since then, she’s down more than 3 percent. In addition, she was the only candidate with double-digit percent of the vote. Now there are three others.